On the Flip Side of Cleft Lip Repair

Hello all, and apologies for taking so long to make my next post. When I left you last, we were counting down the days until Will's surgery on Feb 4, and now here we are 18 days post-op! I still find it hard to believe that the surgery is behind us - we had so much anticipation leading up to it that it almost doesn't feel real. The road to recovery has given us some bumps along the way, but before I get there, let me take you back to the night before his surgery and tell you about our journey. Will's surgery was the first one scheduled for the 4th, meaning we had to be at the hospital at 6a, so we knew it would be better to spend the night in the city and not have to worry about waking up ultra early and dealing with driving there the morning of. We booked the apartment through the myFace foundation (www.myface.org), which is the non-profit associated with the NYU team, and luckily it is located directly across the street from the hospital so we knew it would be exactly what we needed. Well, Monday, Feb 3rd brought with it a massive snowstorm across NY and NJ. As in, roads were a disaster all day. Of course. That evening, we said goodbye to Sadie as she left to stay with my parents for the next few days, and then we hit the road around 7p to head into the city. Here he was just before we left home. 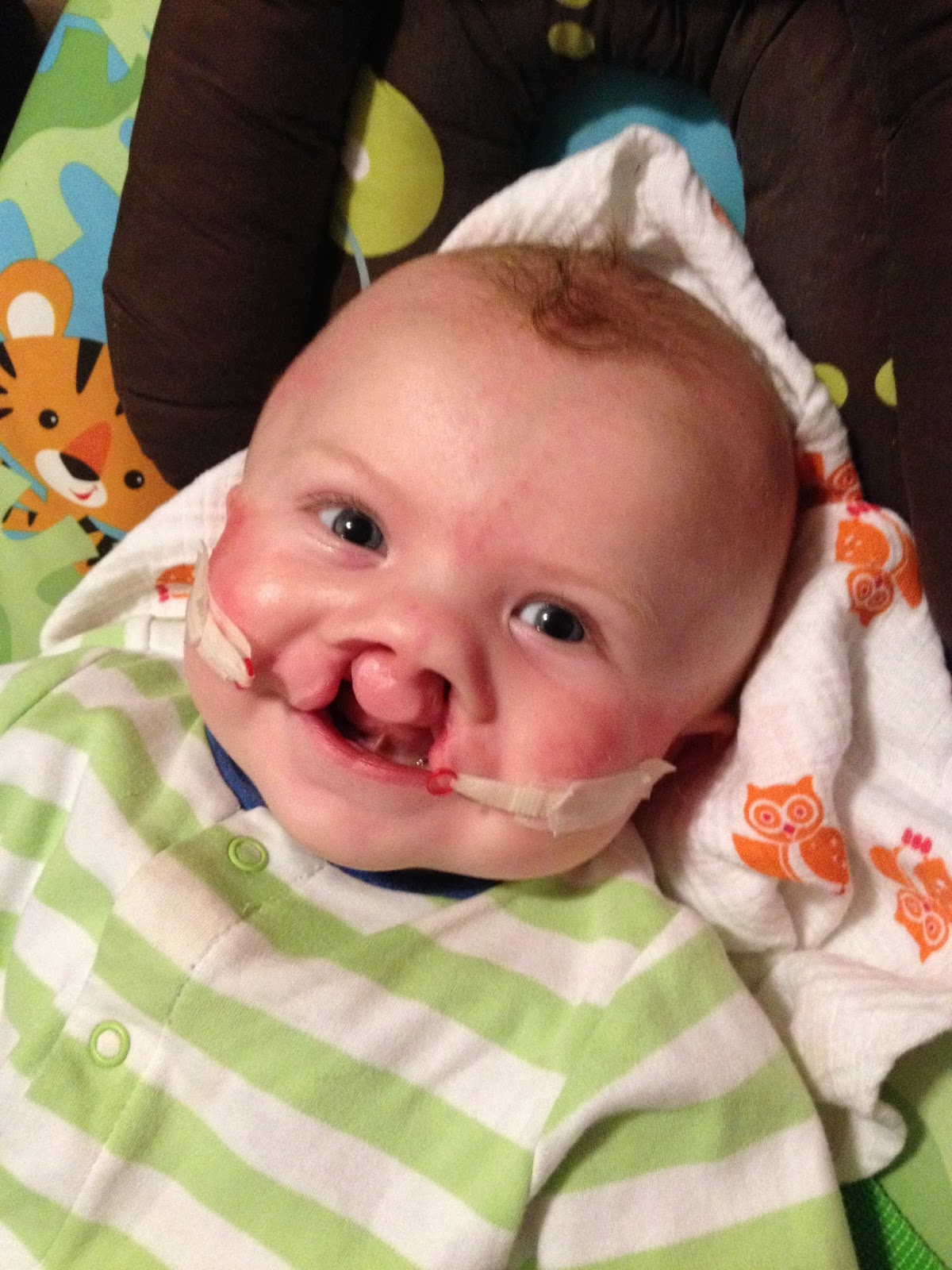 It was a mess, but we took it easy and didn't have any issues getting there. That night, while Will peacefully slept in the teeny little kitchen of the studio apartment, not knowing what was in store for him, Buddy and I were anxious and didn't know what to do with ourselves. It was such a surreal feeling, knowing that we would be handing off our little man the next day to forever change his sweet little smile. I think we both managed to get a few hours of sleep, and before we knew it, it was daybreak and time to head over to the hospital. We checked in at 6a as planned, waited a little bit and then Will had a quick checkup by one of the nurses to make sure he was ok for surgery. After he was cleared, we were brought back to a final waiting room where we then met with the anesthesiologist and the surgeon, Dr. Warren, one last time before we changed him into his little hospital gown. Here we were in the waiting room, and then in his gown all ready to go back. 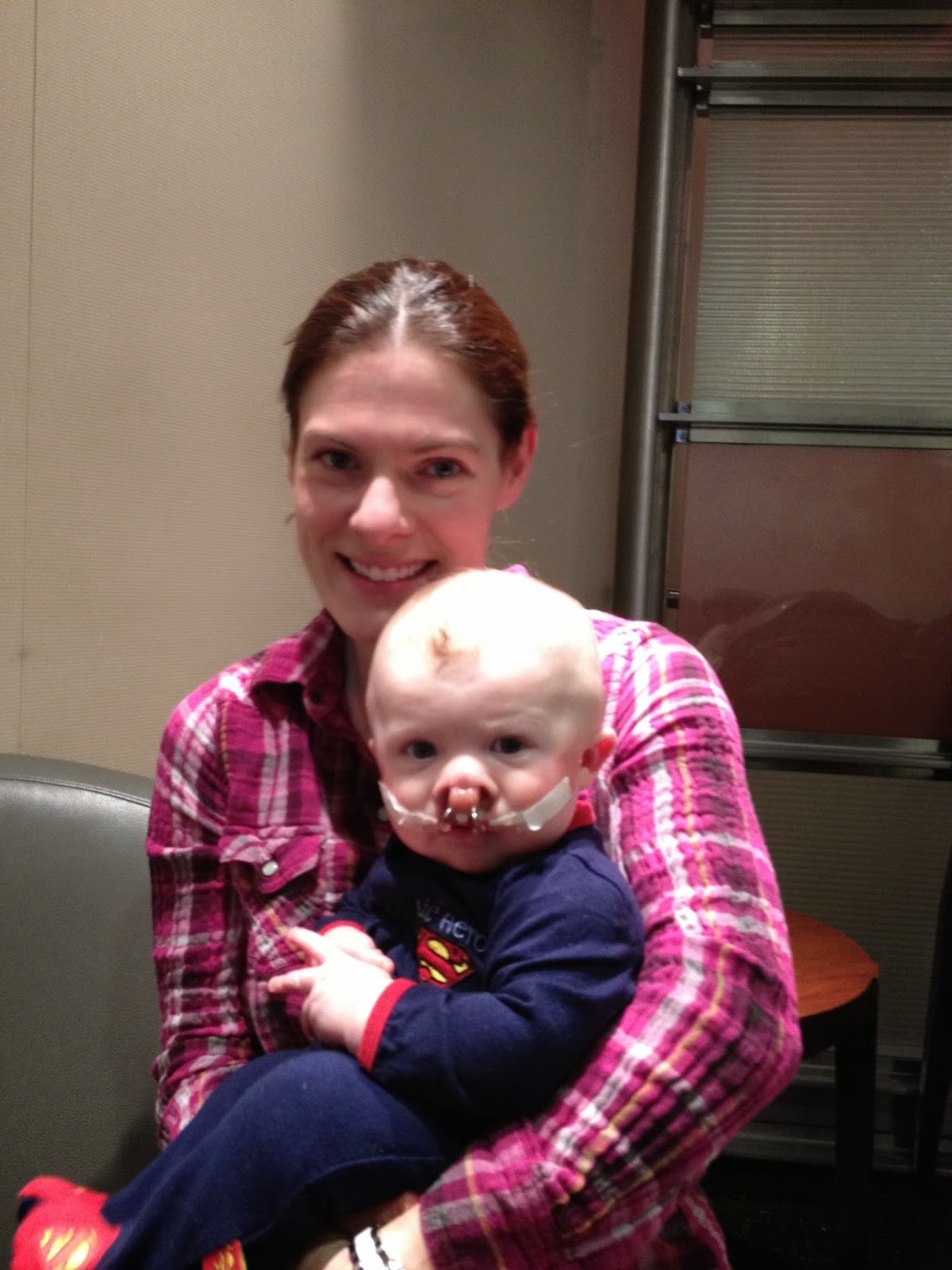 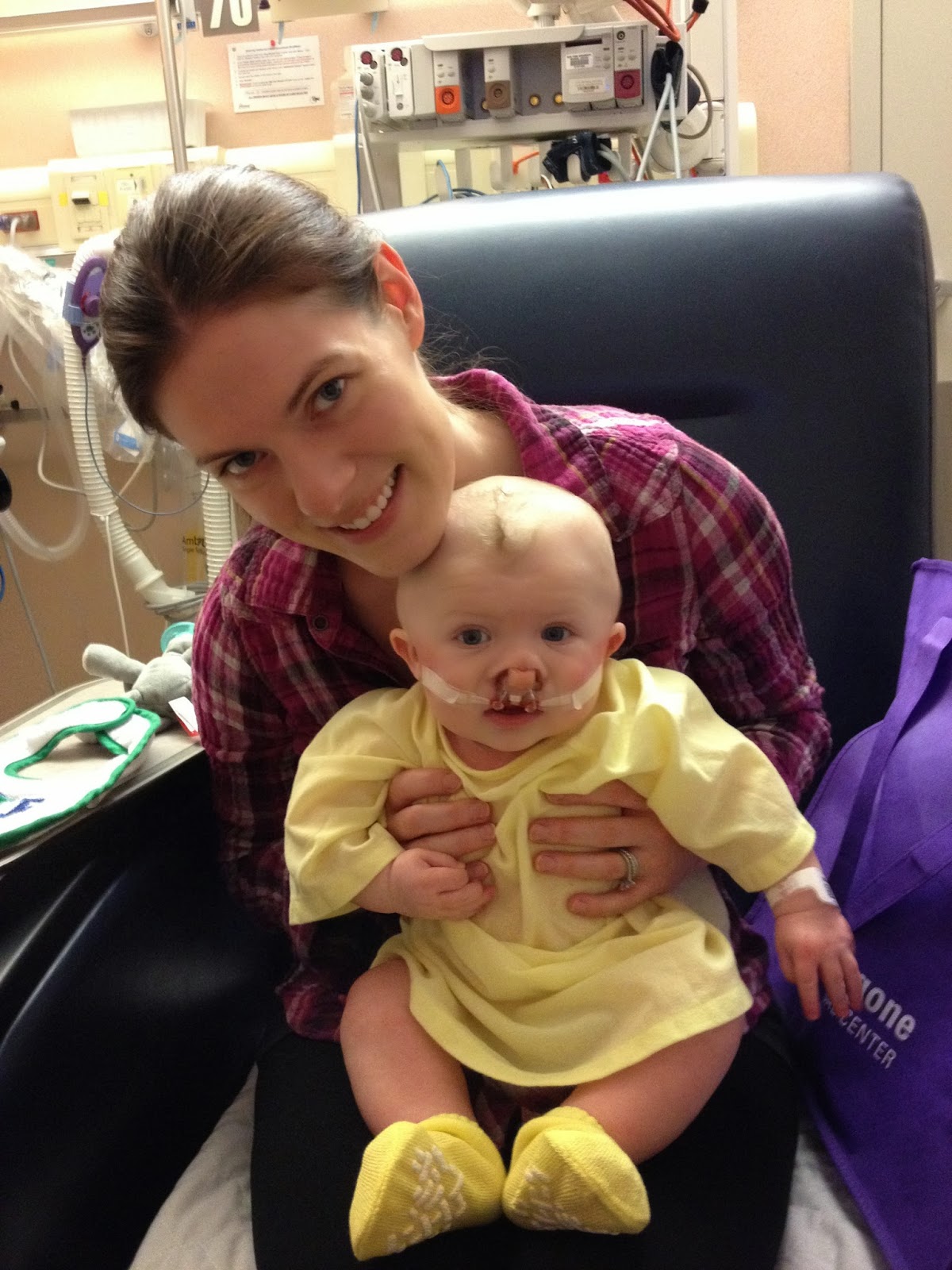 We were able to walk him back to the OR doors, and then we had to say our goodbyes. I stayed strong all morning because I didn't want my little dude to see mommy cry, but handing him off definitely stole a few tears from me. We handed him over at 7:30a, and then the waiting game began. We knew it would be a long surgery as Dr. Warren had explained to us all that was involved - lip, nose, and gum repair - and that he took about 7.5 hours to complete it. In fact, one of the nurses described Dr. Warren to us as "an artist who likes to take him time", and you know what, being this is our child's face we're talking about, I'm plenty happy to have an artist working on him. Believe it or not, although the day was long, I actually worked all day and it made it go by much faster than I expected. And more importantly, it distracted me from worrying the whole time (thanks, work!). We received a few updates throughout the day, each time receiving a report that everything was going excellent, and then just as 3p rolled around out came Dr. Warren to let us know he was done and everything went beautifully. They had Will in recovery and were helping him "wake up" from the anesthesia, and we could go back to see him in about 30 min. I'll tell you, those 30 min were the longest of the entire day to that point - it felt like an eternity as we waited to see him and I was flooded with anxiety and emotions. I found myself wondering what he would look like, whether would I still find him handsome, and whether I would be happy with his repair. All of that went away as soon as I had him in my arms. My sweet little baby, still completely out of it but trying to wake up, sort of whimpering, face swollen and new... and I instantly fell in love with him all over again. Instantly. Here he was in the recovery area just after we got back to see him. 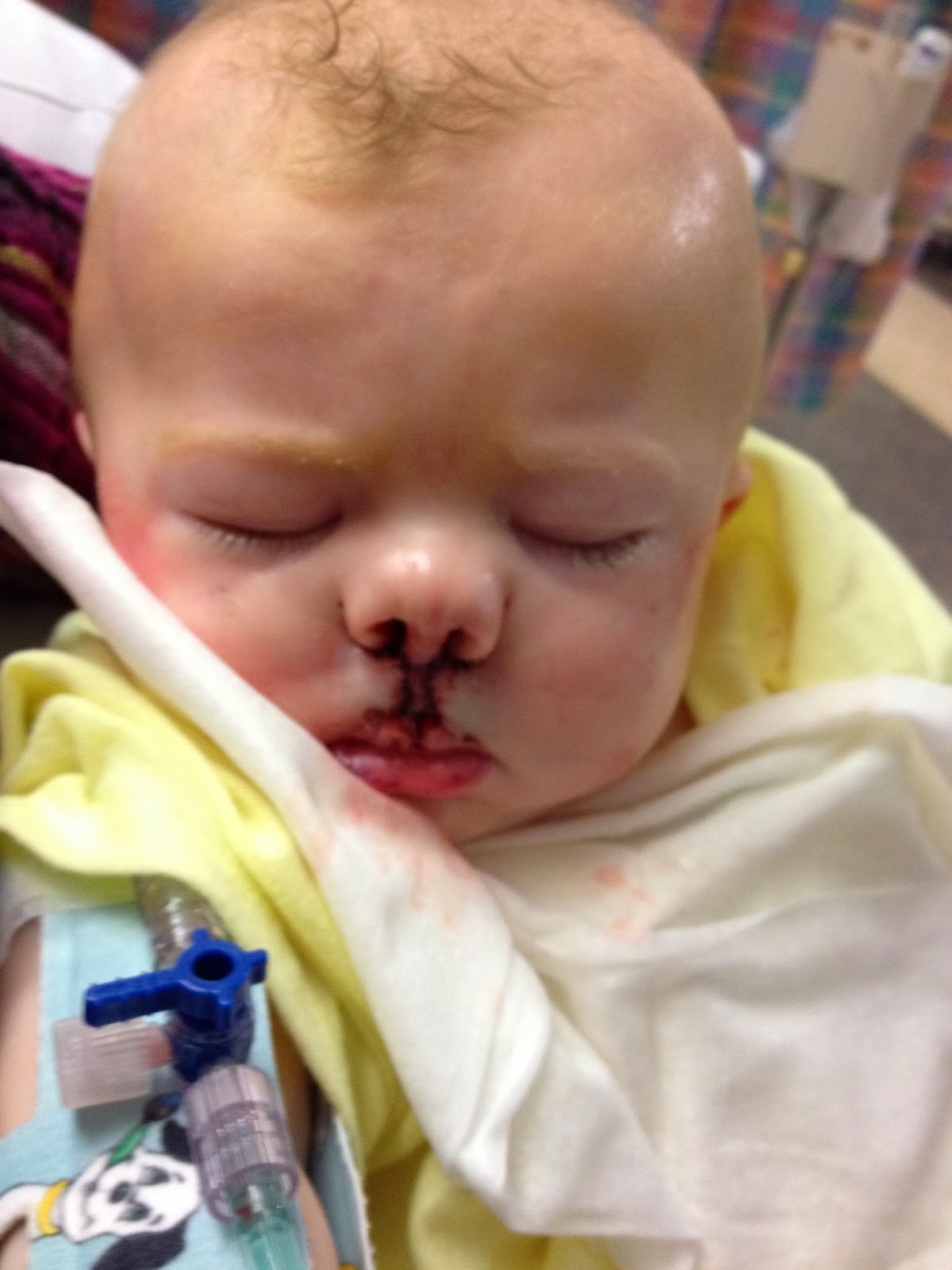 We stayed in recovery for about 2 hours I think, and then our room was ready for us. It was a room shared by 3 other patients. Yes, 4 in a room. Dear lord. Saying it was a horrendous night is putting it mildly. Will was in pain, inconsolable and up screaming and writhing every few hours all night long, the other babies in the room tended to cry as soon as I had managed to fall asleep, thus waking me and Will up again, and all I had was on a teeny little fold out chair. I think I slept a total of 3 hours the entire night, if that. It's a memory I would like to soon forget. Luckily we had kept the apartment across the street for one more night, as there is no way Buddy could have possibly stayed there was literally just no room (and might as well let one of us get some sleep)! I'd say around 4 or 5a I started hearing sleet hit the windows - yes, mother nature was gracing us with another winter storm perfectly timed for the day we were to be heading back home. We were discharged from the hospital around 12:30p and headed over to the apartment to figure out what to do. After much deliberation, we decided we would be much more comfortable at home, so we decided to hit the road. Luckily, it was mostly just wet by then, and again we took our time and made it home safely. Whew!

The first few days and nights home were pretty awful, not going to lie. It was like having a newborn all over again - constant feedings and not much rest at all. The stronger pain meds they prescribed for Will upset his stomach and made him puke up every bit of formula we had managed to get him to eat (which was not much), so obviously that wasn't going to work as we had to ensure he remained hydrated. So after just three doses of the stronger stuff, we had to switch to just Tylenol for his pain and hope that it would be enough. In addition, we have to follow certain restrictions for 3 weeks - he has to wear arm restraints to keep his hands out of his mouth, he can't have his regular bottle so has to eat from a special feeder, and no binkie. Between the pain and the restrictions, Will has not been a happy camper. Besides the initial pain, I think the binkie withdrawals have been the hardest for Will. He always used it to soothe himself to sleep and all of a sudden we took it away. He has been struggling so hard to fall asleep since surgery - he literally screams and screams and almost nothing soothes him. It has gotten a little better, but we still have a ways to go - we used to be able to lie him down awake and he would fall asleep within minutes; now, I basically have to pace around with him until he tires himself out from screaming, which can be anywhere from 15 minutes to hours (yes). It's heartbreaking and frustrating at the same time. I just want him to feel better and to get back to his usual self. Besides falling asleep, though, he has been mostly back to his normal self since probably about 5 days after surgery. He's definitely not as content as he was before, but he's getting back to it.

In terms of healing, Will is doing fantastically. His repair looks amazing and we're beyond thrilled with his results. He had his surface lip stitches removed after 1 week, but still has tons of dissolvable ones in there - Dr. Warren said there are 3 kinds that will take between a few weeks or up to 4 months to fully dissolve. We keep a piece of tape over his lip, which we are supposed to do for 6 weeks post-op - Dr. Warren says it helps to keep pulling the area together as it heals, so even though I would rather not, we'll do it! We're just about done with the restrictions - this coming Tuesday will be the 3 week mark so I think we'll be going back to business as usual sometime this weekend. The final step in this phase of his repair will be getting nose stents placed, which will happen next Wed. He will have to wear them for 3 MONTHS, which I'm sort of bummed about but I know it's to help support his newly formed nose so again, we'll of course do it. I am a little worried about how he'll react to them, but hopefully it won't be too bad, and before we know it we'll be done with those too! Just in time to have a few months off before gearing up for palate repair sometime in September. But I'm not going to think about that right now. Here are a few pictures of his progress to date: 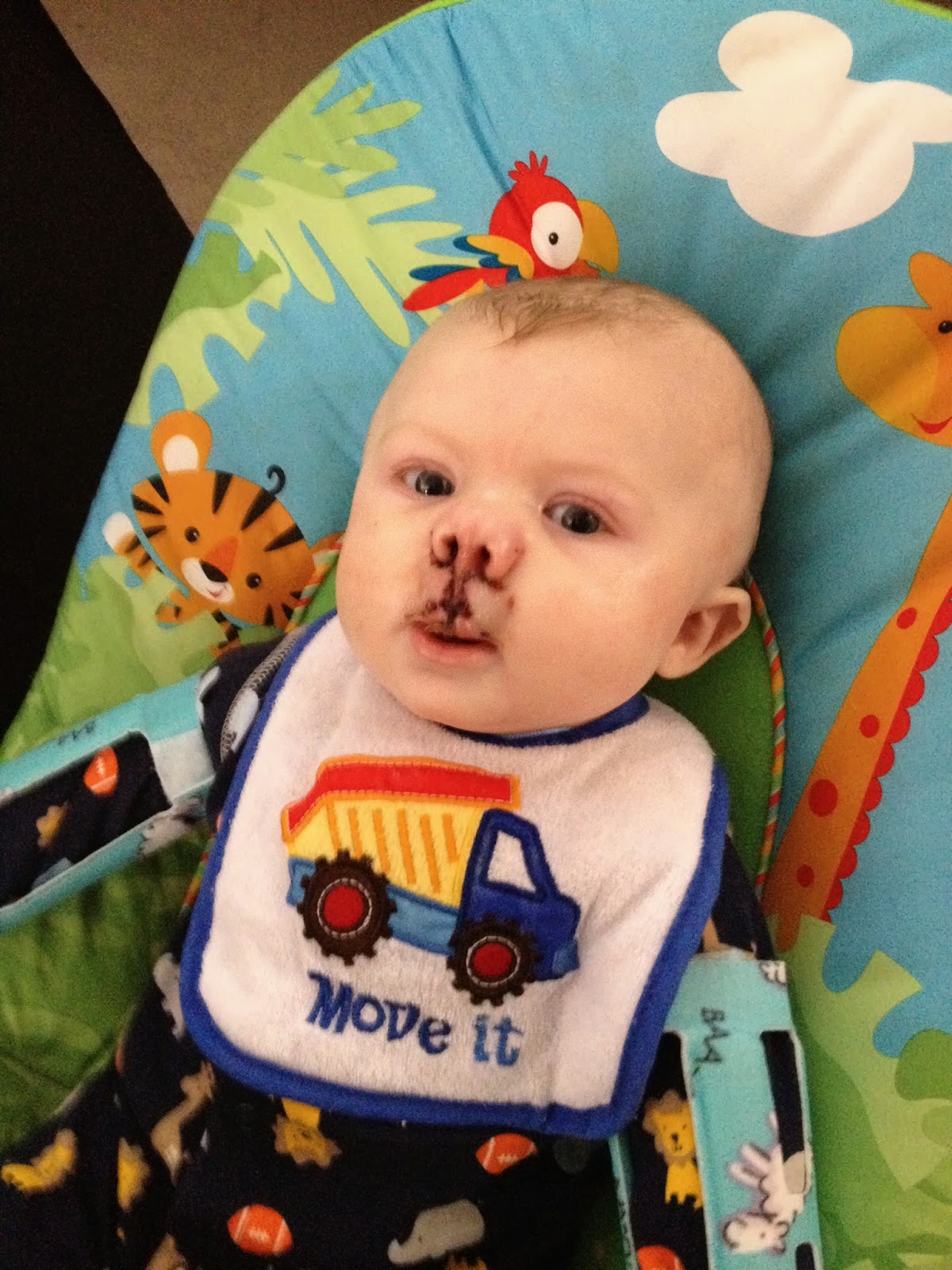 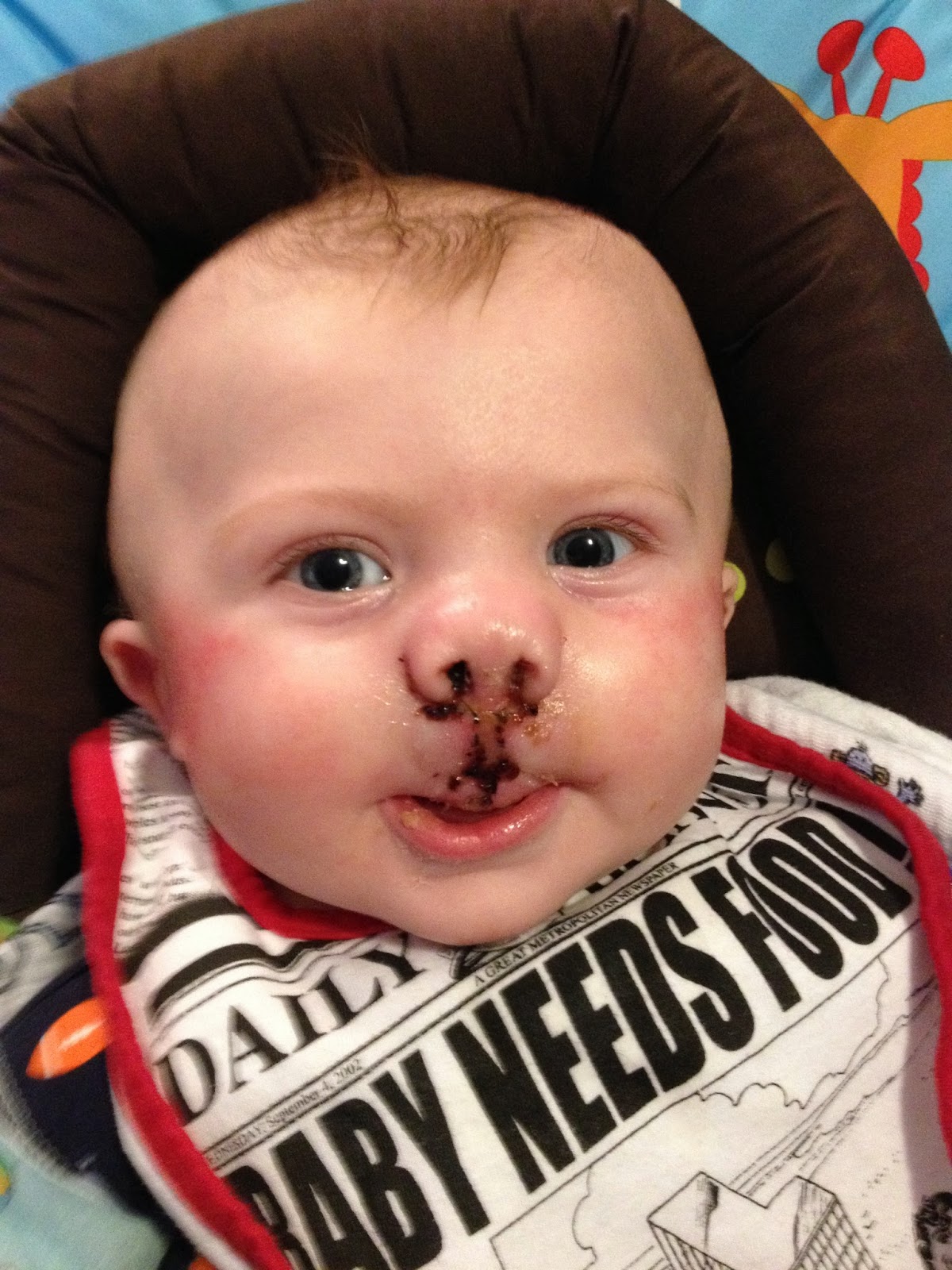 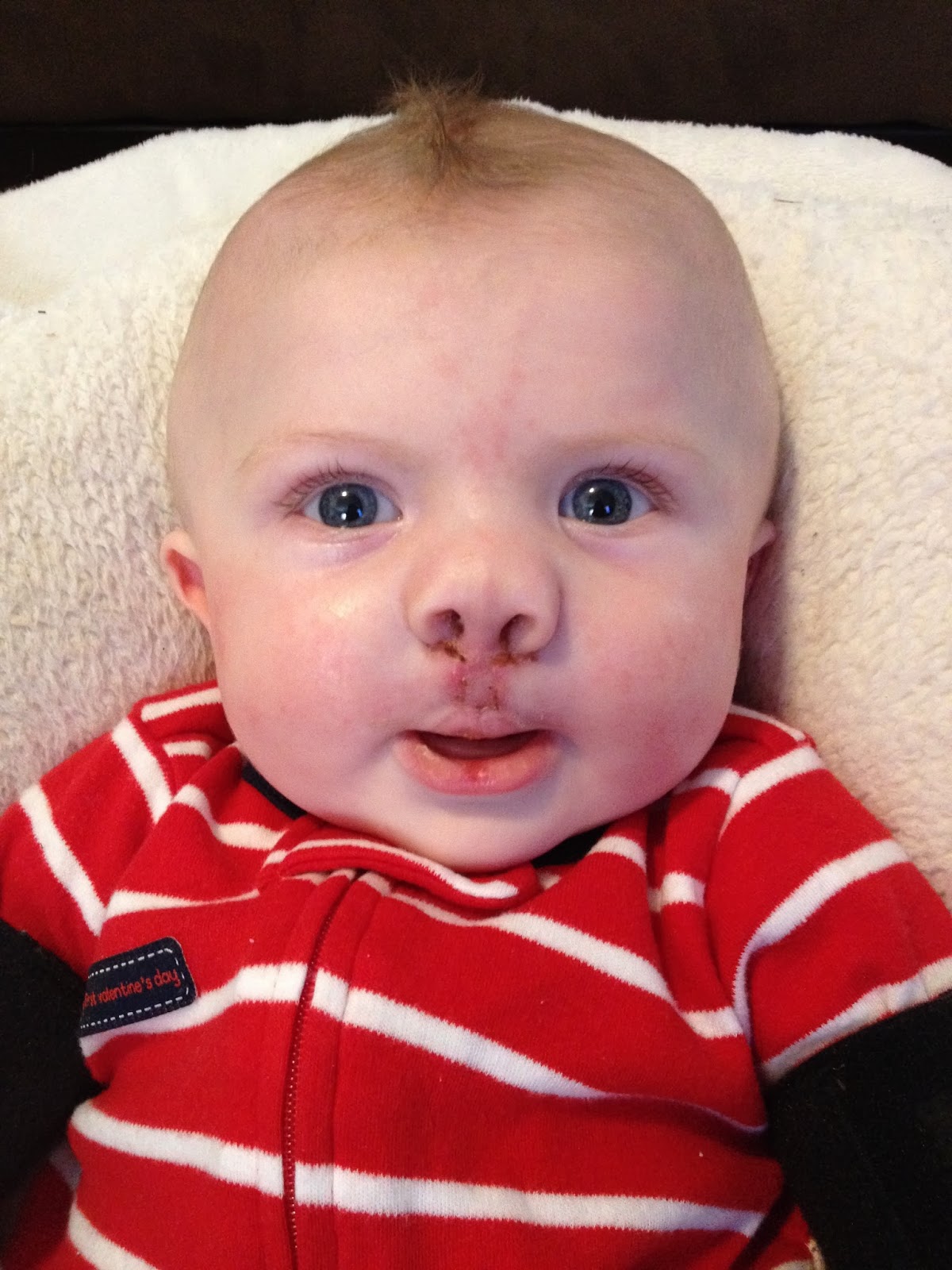 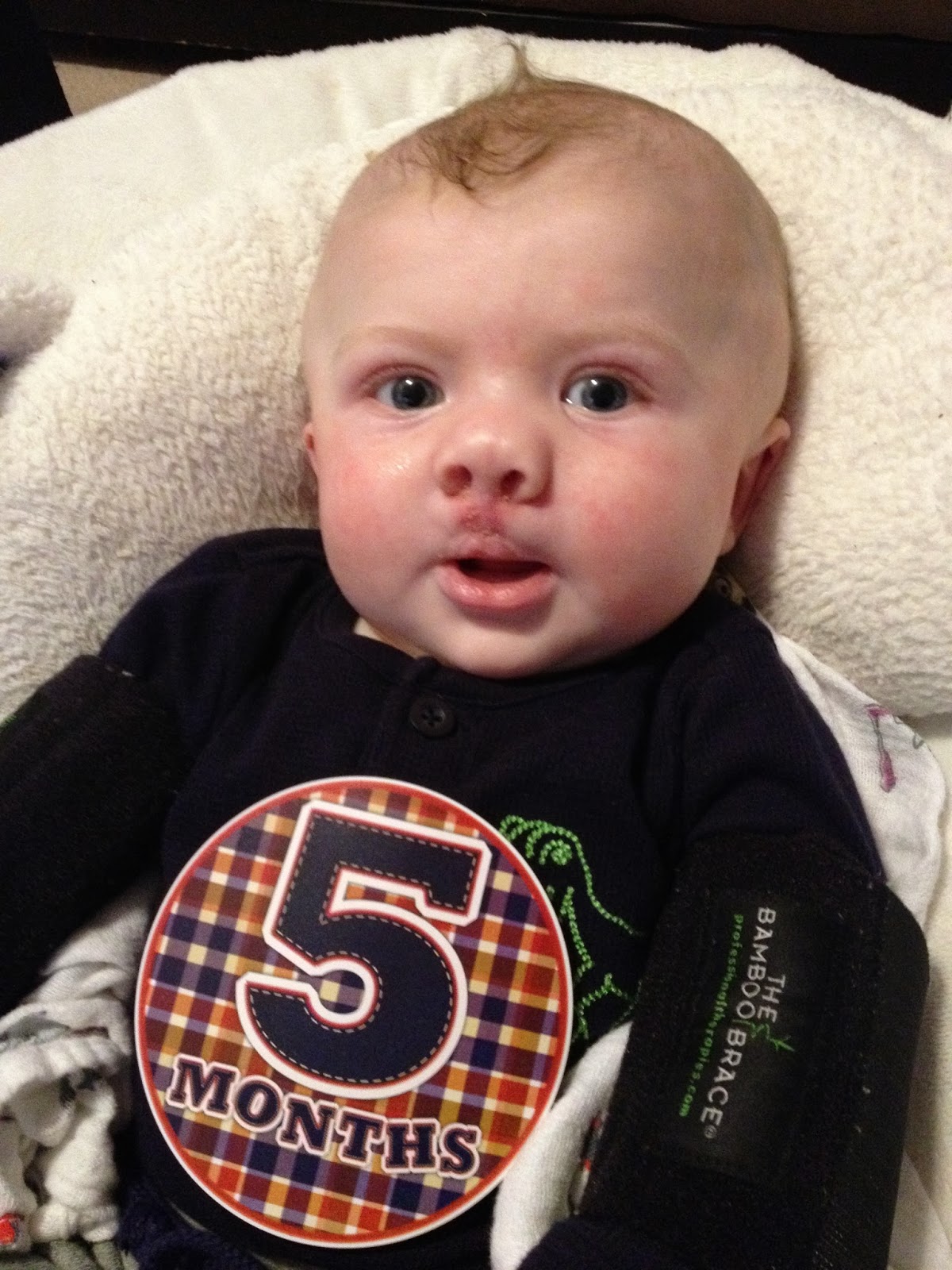 So that's where we are. It's been tough, probably tougher than I expected, but Will is my little superhero and I'm amazed at his strength and resilience. Although mommy and daddy will unfortunately remember every part of this journey, luckily he will not. We will of course show him the pictures and this blog so he understands and is proud of what he's been through, but I'm so glad he won't remember the pain or struggles. I wish I could take it all away from him, but since I can't, I am just doing the best I can to help him heal quickly and keep him happy.
Posted by Unknown at 9:46 PM