It is hard to believe that we are now nearly 8 weeks post op from Will's lip, nose, and gum repair. We are so amazed at how wonderful it turned out, and so grateful to be working with such a fabulous team. I know I say it all the time, but we LOVE Dr. Warren and our entire NYU team. Here's Will this past week: 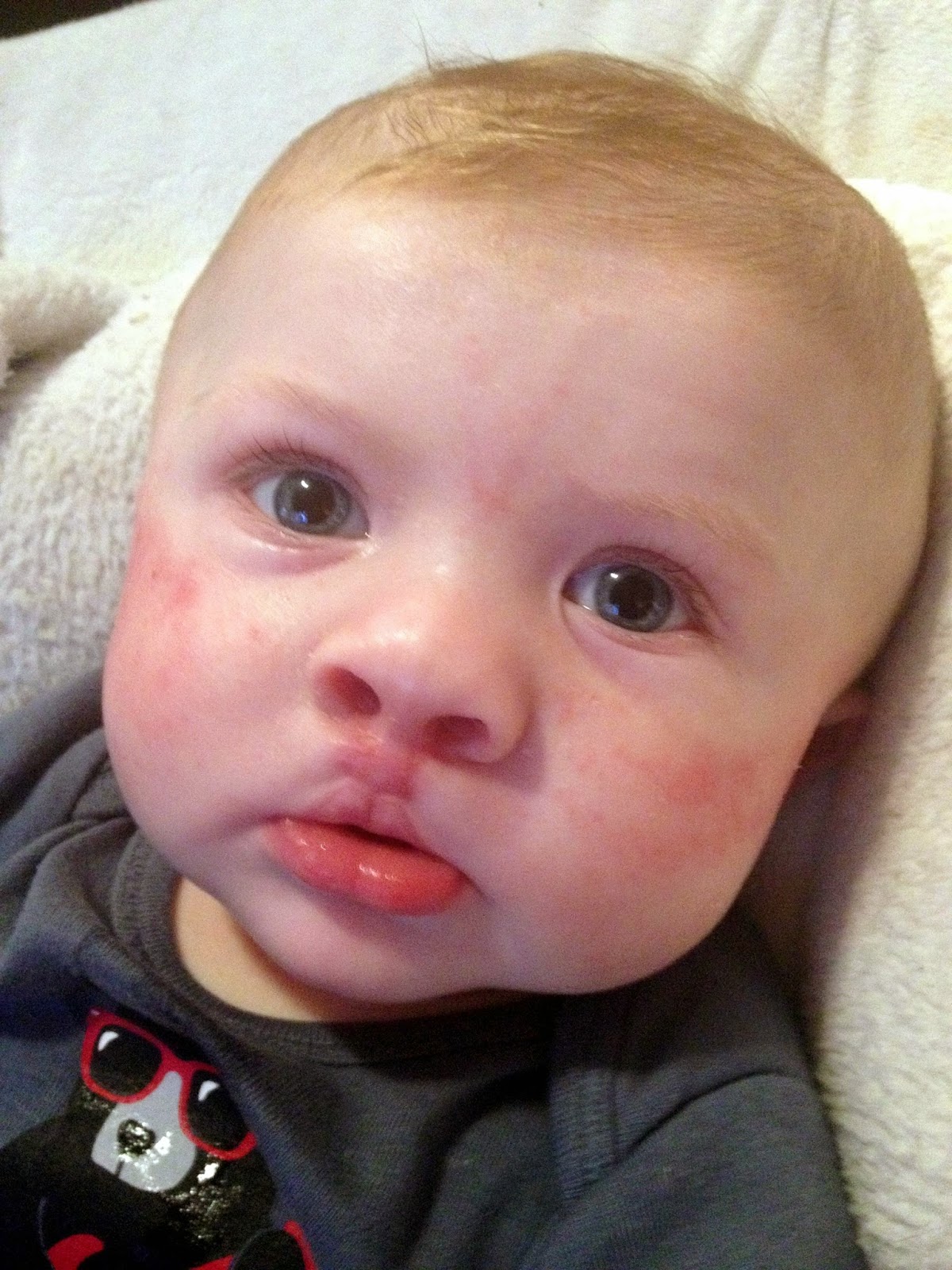 As far as recovery goes, Will has been healing very well. He's been a bit more red than most babies on and around his incision lines, which is a result of his body fighting those stitches that are still in there. But other than the redness, which will go down as the sutures continue to dissolve over the coming weeks, he looks fantastic. Especially his nose - such a cute little button nose! But let me tell you, that nose takes WORK! Will got nasal stents at 3 weeks post op and he has to wear them for about 4 months to help shape the tissue as it heals. The stents are taped on very similar to how we taped the NAM, so we are facing the same struggles with his cheeks being so irritated and we are having a hard time keeping the tape on as we did with the NAM. In fact, I would say it's actually worse than the NAM because he's older now and it is not unusual for him to literally rip the stents out, tape and all, on a daily basis (of course further irritating his cheeks). Plus, he screams bloody murder as soon as he sees us coming near him to place the stents and shakes his head side to side the whole time we're trying to place them. It's pretty awful actually, and I literally have to pin him down to get the stupid things in. Every day. Sometimes more than once if he rips them out. But... the results are obvious, and they are really making a difference in the shape of his nose, so I know that they are completely worth it and of course will stick it out for as long as we have to. But it sucks and I don't have to like any of it. Here's a side by side shot of Will before stents and then after having them just one week, and another shot showing how the stents look when they're in. 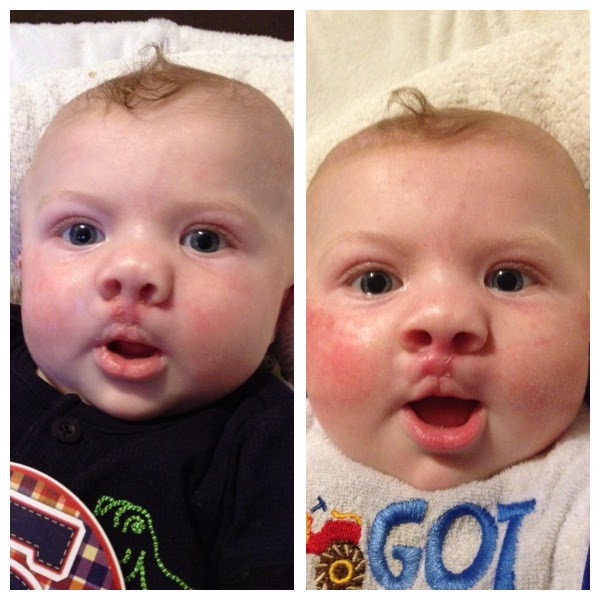 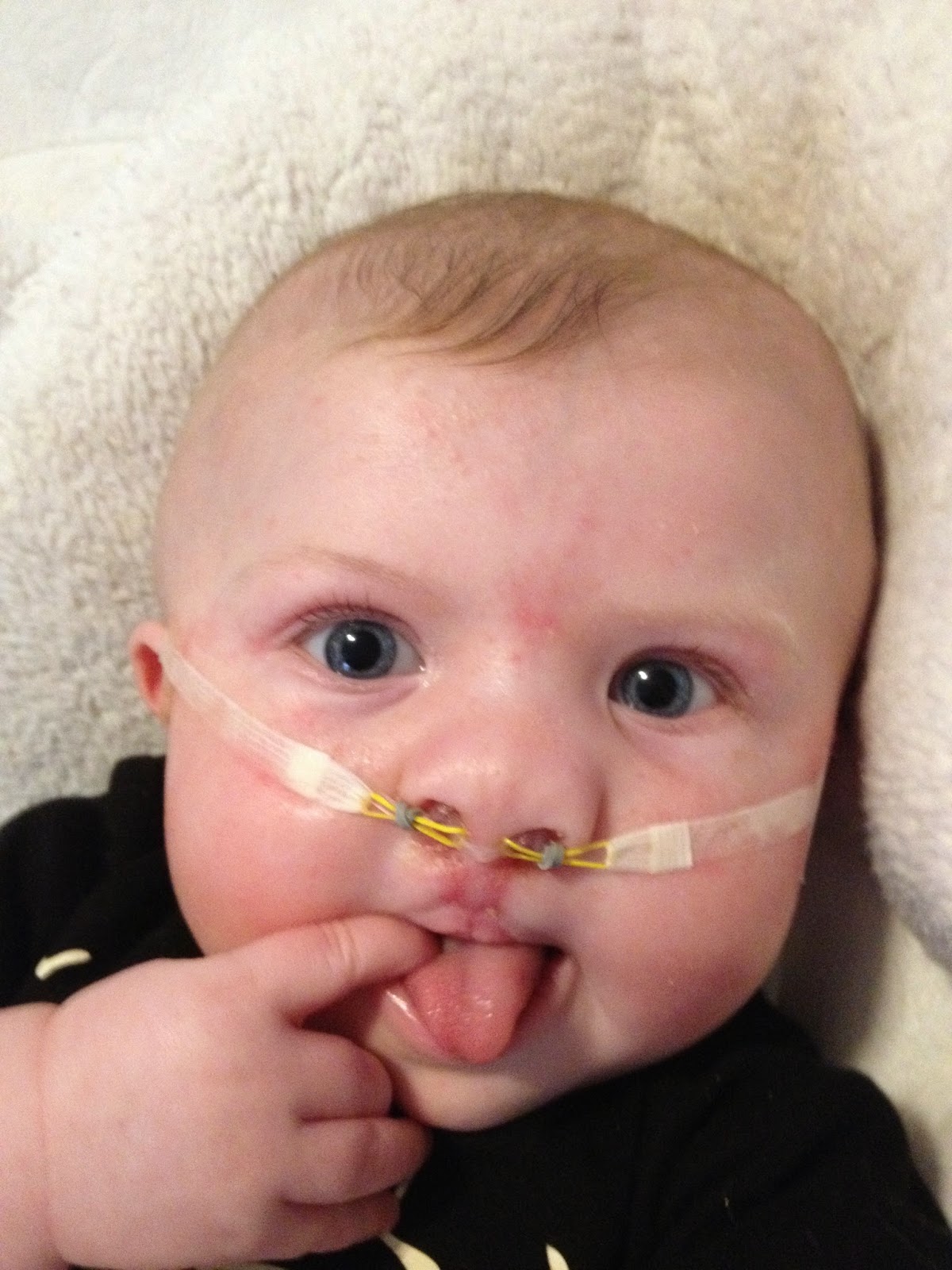 In other exciting news, I have been working hard on a new cleft website called Cleftopedia with my West Coast twinnie, Dara Smith - we just launched it this past week and it's already receiving an amazing response in the cleft community! Dara and I met through the Baby Center Cleft Moms facebook group, and as our friendship has developed, we discovered we have freakishly similar lives: we are the same age, have 2 kids that are the same age, with similar birthing stories, her daughter Isla also has the same bilateral cleft lip and palate as Will and is just 5 days younger than him, their surgeries were a week apart, we're both into tattoos, have tattooed hubbies who are into the same kinds of music and have similar interests... seriously the list could go on and on! But one of the biggest things we had in common was how difficult it was for us to choose a cleft team while we were pregnant. There's a lot of information out there, in a lot of different places, and yet none of it is very detailed or particularly helpful beyond offering a simple listing of teams that exist. One day we were talking about how helpful it would have been to have a more detailed list of cleft teams that clearly outlined things like their pre-surgical approach, post-surgical restrictions, reviews from other parents and before and after pictures. It was from this discussion that the idea for Cleftopedia came about - what started out as a more thorough team listing, also grew into a full cleft resource intended to help out new cleft mommies as they start their journey. It is unique because it's based completely on the personal experiences of over 200 cleft mommies, and includes information on different bottles and sippy cups, thorough descriptions of the various pre-surgical techniques with real life examples and photos of results, and of course it has the more detailed cleft team listing, which is the true gem of the site. I am so proud to have created such a thorough site for new mommies, and it feels amazing to be able to help so many others as they embark on their own cleft journeys. I'm also grateful to have met someone as awesome as Dara, who is an incredible mommy to her girls, and a super cool chick to boot. I can't wait to see where Cleftopedia takes us, and I'm looking forward to the ride.
Posted by Unknown at 9:34 PM No comments: