Wow - it has been quite some time since my last post. I have to admit, things have been relatively quiet on the cleft front for some time now, but today is pretty special because it marks Will's 1 year "Palateversary"... meaning it's been a full year since his palate repair, which was his second (and last) surgery so far. I debated whether or not to even do a post because, quite frankly, I am not sure I have anything that riveting to share. But then I realized that not having anything riveting to share, in and of itself, is THE reason to post. This last year has been, for the most part, totally "normal" and Will has had the freedom and opportunity to just be a kid and have fun. No devices in his mouth or taped to his cheeks making them bleed, no surgery to cause him pain and weeks of recovery (not to mention saving mommy all of that heartache), and no seemingly endless barrage of doctor's and specialist's appointments. Instead, Will has been growing, developing, and learning at what feels like lightning speed (slow down, kid!!), and this year he's been able to be just like all the other kids his age. And it's been a blast. I mean, just look at this kid! 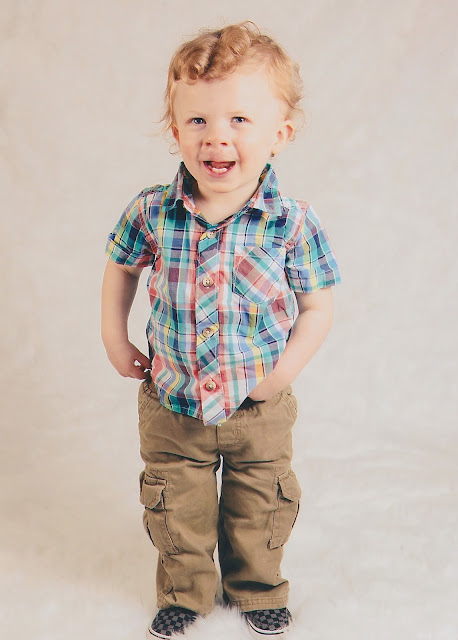 Some of you may be wondering if there has been anything different for Will this last year due to his cleft. And the answer is yes, a few things. Nothing like his first year, thankfully. While his first year was all about preparing for and having 2 major reconstructive surgeries on his lip, nose, gums, and palate, this year has been about focusing primarily on his speech development. We got Will into Early Intervention before he was even 1 year old, because in PA he qualifies automatically due to his cleft, and I figured it would be a good idea to be proactive. We didn't start speech therapy formally until a month after his palate repair, and he's been in it ever since. I think most people assume palate closure is important for eating or breathing, but in reality, the surgery is all about enabling proper speech development. Children with a cleft palate can have a hard time making certain sounds that require the use of the palate and the muscles in the back of the throat (such as b/p/d/t/k/g sounds). Initially, Will got into the habit of replacing b and p sounds with a g (so bye bye was gye gye, etc), and I admit I was nervous about it, but we gave him time and continued to work with him, and after a few more months, he began making all of his sounds correctly. Whew! We are fortunate that he has always been very talkative, he does not have a hypernasal sound that is a telltale sign of people who had a cleft palate, and his speech has continued to progress ever since palate repair exactly as it should. I would say in the last 2 months, his speech has really exploded and he is saying more and more new words each and every day. It's exciting for any child to hit a speech growth spurt like this, but I must admit, it is especially thrilling and rewarding to see my cleft baby conquer speech like a boss! To reiterate the significance of just how far Will's come, here is a collage of his lip and palate before on the left hand side, and his lip and palate now on the right. 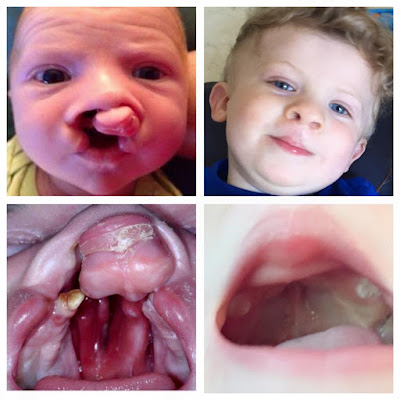 In addition to speech, we've also spent some time working on improving the appearance of the scars on Will's lip. We are so thrilled with the result of his repair overall - his nose is absolutely perfect and not flat at all (thanks to the NAM, our surgeon's technique, and the post op nose stents), and his palate was repaired beautifully with just one surgery (many require a few, especially those as wide and severe as Will's was). But we've struggled with how his scars developed- they have been very red, raised and prominent. Fortunately, Dr. Warren (our amazing surgeon) recommends the use of a series of steroid injections in the scar over several months, before performing a lip revision surgery. Will has had 1 injection in the one side of his scar, and 2 additional injections in the other, more stubborn side, which have truly made an enormous difference in their appearance. The results are not immediate - in fact, each injection can take up to 3 months to see the full effect - but over time they've really done wonders. His scar is now flush with his skin and the texture is far softer than it was before. This collage shows Will's progress with the first 2 injections - the first picture on the left is at 11 months old when his scars were at their worst, the middle is after the first injection, and the right is after the second injection. 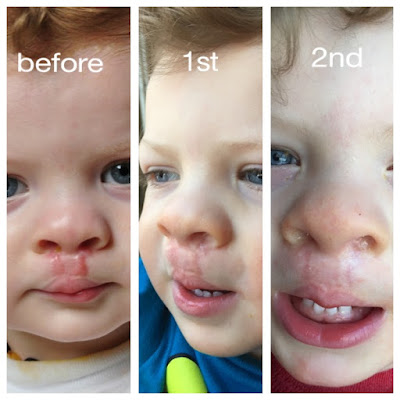 And here is Will now after his last injection, which was at the end of July. 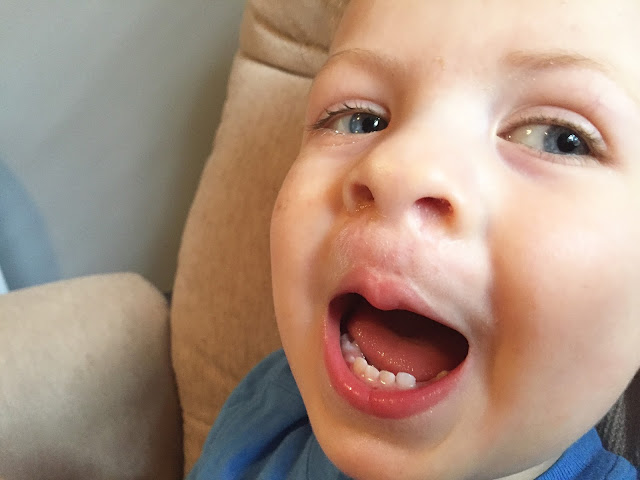 So what have I been doing with all this free time? Well, I've continued to stay actively involved as an admin on the Facebook group Cleft Mom Support. And Dara and I have been working like crazy to expand Cleftopedia's reach as well as increase the variety of offerings we have available to provide support for cleft parents: we've introduced quite a few new pages over the last year, and have become quite active on social media as well. Plus, we've got so much more planned for the site, so the work doesn't stop here... and I don't want it to! This is my calling and I am loving every minute of it!! What's really cool is that last month Will's story was featured in our local paper, and it feels so good to help spread awareness in as many ways as I can!

So that's where we are: living life, having fun, and honestly we barely think about his cleft at all these days. If someone had said that to me before he was born, or even within the first year, I would have looked at them like they were crazy. But it really is true! So for the cleft moms out there still early in their journeys, have faith, and know that it DOES get easier- there really IS life beyond the cleft!! I look back on the last year, and it is incredible to see how far we've come.